Capcom may have assembled the biggest cast and scope in the history of the series, but Resident Evil 6 fails to live up to its legacy.

But all this fan service goes to waste. Resident Evil 6's myriad problems - from tedious quick time events to baffling boss battles to obnoxious set pieces - should be enough to warn most players away from this muddled disaster. 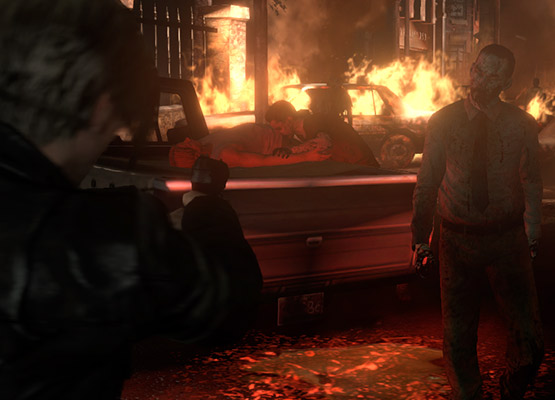 Resident Evil 6 introduces the C-Virus, the latest strain of the zombie virus that has plagued the series' protagonists since the original. Initially enemies don't act much differently than Resident Evil 4 and 5's Plaga-infected villagers, but C-Virus recipients seem to have a greater penchant for guns; a majority of the enemies you fight in Resident Evil 6 carry a firearm.

Since most of the enemies have guns, players can now move while shooting - a necessity to deal with the increased size and power of the foes. You can also duck behind objects to avoid enemy fire, but the game's awkward, sticky cover system had me unintentionally magnetized to surfaces far more often than it actually helped me.

The amount of content Resident Evil 6 has stuffed onto its single disc reeks of excess. Each of the four campaigns could make up a full game in and of themselves; placed together they form one of the longest action games I've ever played. If only the quality matched the quantity. 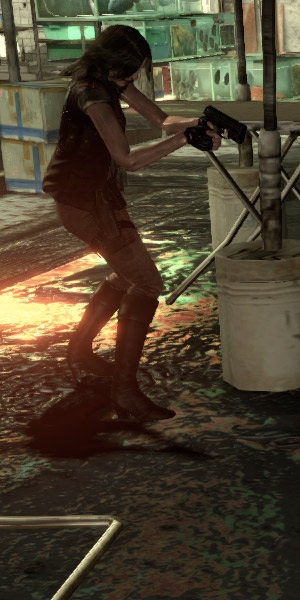 Though Capcom has emphasized how each of the campaigns will appeal to a different type of Resident Evil fan, they're less varied than they appear at first and often suffer from the same problems. Leon's campaign may begin with an old-school Resident Evil vibe, but it's not long before he joins the same big dumb action movie as everyone else.

Every campaign is full of that kind of moment. The scope is overblown, even compared to Resident Evil 5; I never imagined I'd destroy anti-air guns in a war-torn Eastern European country as an objective in a Resident Evil game. But dissonance with the series' past is the least of the game's problems. The real concern is that Resident Evil 6 doesn't execute on any of its myriad gameplay styles very well.

In the middle of Chris' campaign, he jumps into a military Jeep that controls more like a tank in a monotonous driving sequence. Jake takes a break from zombie-slaying for an inexplicable and infuriating stealth sequence, complete with a buggy crescendo where failing to understand the game's poorly-explained suggested course of action causes the enemy AI to freak out. These switch-ups happen fast and often - a flood of variety distracting players from Resident Evil 6's primary run-and-gun gameplay. And it has a good reason for those distractions.

Despite antiquated elements like aiming in place, Resident Evil 4 and 5 succeeded in making gunplay satisfying in large part because the weapons felt powerful. A shot to head in those games may not instantly kill an enemy, but it would at least stagger them or knock them down. Resident Evil 6 offers very little feedback. Sometimes a headshot will blow an enemy's head clean off, but more often they won't even slow an enemy down.

Most enemies will be staggered if you use the new quick shot mechanic. By quickly pulling the left and right trigger at the same time, your character will use up a small portion of their stamina bar to auto-attack a nearby enemy. It can be useful when surrounded by large groups, but it also highlights its manic camera.

Using quick shot causes the camera to whip around, which left me disoriented and needing to readjust for a second or two every time. The jumpy camera overreacts to every movement and discovery in the game. It's jarring, and I suspect it will be nauseating for some players.

The lack of feedback takes its most frustrating form in Resident Evil 6's frequent boss battles, where it's difficult to tell when or how you're having any impact against bosses. Did I do enough damage on this giant snake creature to trigger the next cutscene? Did I just survive long enough? I couldn't tell you, and I suspect the answer is different for each fight. This confusion robs actions of any feeling of consequence. Resident Evil 6 is the worst kind of cinematic video game - one where the player's part in the process is an afterthought at best.

It's so much of an afterthought, in fact, that an alarming number of player actions are relegated to button-mashing quick time events. Resident Evil games have fallen back on waggling the analog stick or quickly tapping a button to escape instant death for a long time, but Resident Evil 6 takes that bad habit to depressing extremes. I lost count of how often a quick time event popped up out of nowhere with split-second timing required, guaranteeing that I failed and died the first time.

Even worse, some of those already-awful boss fights end with increasingly difficult demands to tap a button over and over. Just when you think you might be finished with a particularly annoying segment, you'll run into and fail a quick time event and find yourself forced to replay the last five minutes.

Resident Evil 6's overuse of multi-form, never-really-dead bosses also has a negative impact on the game's ridiculous narrative. While the Resident Evil series has never had great writing, even the characters seem fed up with the absurd situations this game puts them in. "I think he's dead," becomes code for "I think he's still alive and going to attack us again in five minutes." And when you encounter a repeated boss in its third or fourth form, one of the two playable characters invariably lets out an exasperated, "This guy again?!" 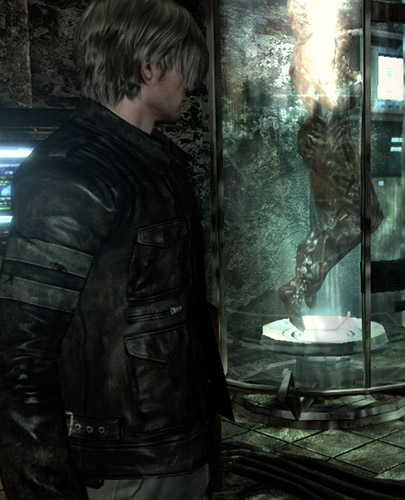 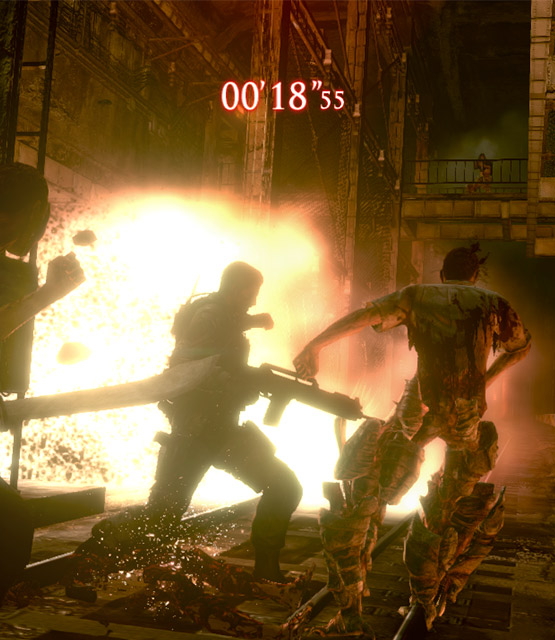 Beyond the regular campaign co-op, Resident Evil 6 has a couple of options for those looking to hang out or compete with friends:

Mercenaries - A returning favorite, Mercenaries mode takes the action focus that the series has had since Resident Evil 4 and boils it down to its basics. Pick one of three maps, watch zombies slowly flood in, and try to kill as many as possible before your time limit ticks down to zero. The tweaked shooting mechanics of Resident Evil 6 rob Mercenaries of some of its fun, but at least it's one part of the game that sticks to pure gunplay without any terrible set pieces.

Agent Hunt - This new mode puts an interesting spin onto competitive multiplayer, allowing real players to invade your game as zombie creatures. Human opponents are limited to a small number of playable baddies - none of which control well or feel particularly powerful - but it's worth flipping this option on if you want a little more difficulty and randomness added to your experience. -P

At least you always have the option to drag a friend alongside you for this horror show. Both in its campaign and in Mercenaries mode, Resident Evil 6 builds on the co-op focus of RE5 with a few meaningful additions. Enemies now drop separate loot for each player, lowering item management time and preventing any bickering over who gets what. If you keep your settings open, you can also hook up with extra players during crossover points in the story or have real players hunting you down as monsters via Agent Hunt mode. These online options connect you to a wider Resident Evil 6 community that has been lacking in the series until now, but they don't salvage the game.

Resident Evil 6 leaves players with the shell of a blockbuster game. It blusters along with massive explosions and insane plot twists, but it lacks a fundamental understanding of why action games are fun. In the end, Resident Evil 6 resembles one of its grotesque mutations â bloated, out of control, and recklessly trying to consume everything around it. Capcom has built a real monster here.