Blizzard's Hearthstone is a gateway drug for card games, not a destination

Share All sharing options for: Blizzard's Hearthstone is a gateway drug for card games, not a destination

One question continues to come up after my three months obsessing over Hearthstone's closed beta: How much Magic: The Gathering experience is needed to understand it? You don't need experience in other collectible card games to play Hearthstone, but you may find that Blizzard's game is something of a gateway drug.

Hearthstone: Heroes of Warcraft is a perfect example of what Blizzard does best. It takes an already active and well-developed genre, and boils the mechanics down to their basics before polishing them to a high gloss while continually balancing play to create an experience that rises above the competition. This isn't the first, or even the most innovative, digital card game. But it is one of the best.

From Blizzard to the classics

The digital card game genre is both varied and healthy, and Hearthstone has inspired me to track down some of its competition.

Sometimes that simplifying can overwhelm the best parts of the game. Earlier versions of Duels of the Planeswalkers didn't include the ability to put together your own deck of cards, a key part of the fun and strategy of any good collectible card game. The 2014 edition has fixed this oversight; I was able to transfer my meager deck-building abilities from Hearthstone over to Magic.

In fact, some games focus on deck-building, such as Stone Blade Entertainment's Ascension: Chronicle of the Godslayer. Available in both physical form and as a fantastic iPad game, Ascension has no heroes and no health pools that you need to drain. The game is based around playing cards that provide resources to let you purchase more cards. You're literally building your deck as you go, with the win going to the player who has picked the most high-value cards by the end. 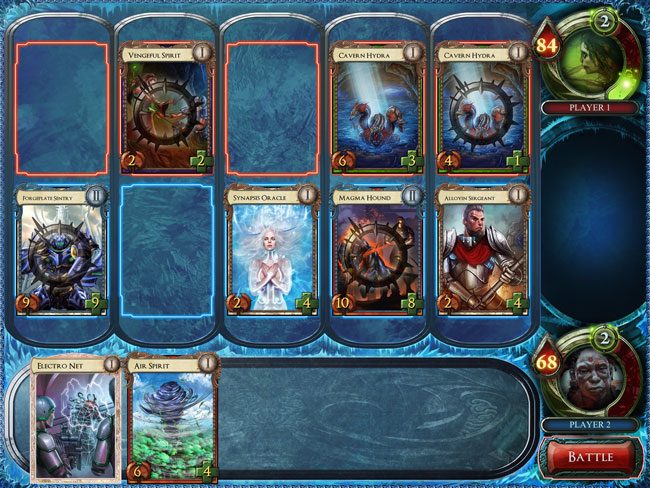 Getting caught up in Ascension led me to Stone Blade's other trading card game, the digital-only SolForge [pictured], which was Kickstarted in 2012. In addition to the various folks who worked on Ascension, SolForge includes the talent of Richard Garfield, one of the original designers of Magic: The Gathering back in the ‘90s.

As you might expect from that pedigree, SolForge is one of the most complex and promising digital card games I've found so far. Embracing things that would be impossible, or at least much harder, in a physical card game, it includes the ability to clone cards with some skills. The actual positioning of cards on the board is also more important: In Hearthstone, any minion you've played can attack any other minion, barring some special effects; in SolForge, creatures can only attack opposing cards that are in the same lane, directly in front of them.

Along the same lines of positioning-centric card games — and one of my biggest surprises — is Might and Magic: Duel of Champions. This Ubisoft-fronted game has some fascinating quirks, such as event cards that can shift the direction of a match. It also mixes health and attack power into the same stat — so attacking a minion actually makes their counter-attacks weaker as well. It may sound minor, but little tweaks like this completely change your approach to deck construction.

The depth and breadth of minor but incredibly important changes in each of these games is what makes this genre so fascinating. I'm barely scratching the surface; I still need to check out cyberpunk card game Netrunner (another physical card game with a popular digital variant) and the more robust (if less flashy) Magic: The Gathering Online. There's even a wrestling-based digital card game!

Best of all, almost all of the examples I listed are free-to-play and have a relatively low barrier to entry. And I wouldn't have discovered any of them without Hearthstone as an introductory course. Don't worry about needing an education in other card games to play Hearthstone if you're starting from zero; worry about what a newfound love for this type of game may do to your free time and wallet. Blizzard isn't trying to take over digital card games, they're helping to broaden the audience for them.

So don't be afraid to take part in Hearthstone's open beta, but also don't be afraid to branch out once you're hooked. The shift from physical to digital has led to an explosion in the number of collectible card games, and even the most similar-looking games have fascinating mechanical differences waiting to be discovered ... and exploited.

HBO’s The Last of Us looks like a faithful adaptation, with an exception

Why do we multitask while gaming?

The best Star Wars droids, according to us