Fusion marks a step back for Trials

The first words you hear in Trials Fusion are "Welcome to the future! Man! Machine! The future!"

You hear these words in the game's main menu, within a theme song on constantly loop. They're "sung" over a sci-fi, synthy backing track as a way to introduce you to this new, futuristic setting. It's hammy and over the top, but it also feels equally lazy, like it's the easiest way to convey this setting in the fewest amount of words. This is fitting, since in so many words, this is Trials Fusion. It cruises on the legacy of its impressive predecessor, offering up mostly the same motorcycle platforming gameplay in a dull package.

Fusion cruises on the legacy of its impressive predecessor

Despite appearances, Trials Fusion is a platforming game. If you've never played a Trials game before, you'd be forgiven for assuming that they're racing games. After all, you control a motorcycle and there's a timer in the corner of the screen. But the objective of each of Trials Fusion's many tracks is to make it to the finish line with as few errors as possible.

To this end, you take ridiculous jumps while shifting your weight in midair. You want to make each landing clean, but still maintain your current momentum. As Trials Fusion progresses, the platforming requirements become far clearer, as you're tasked with bunny hopping from tiny platform to tiny platform, utilizing deft flicks of the analog stick in combination with some careful acceleration. Failure in these later levels is inevitable, but Fusion makes restarting at a previously attained checkpoint as simple as a button press. In the game's final level, I had well over 200 restarts before reaching the finish line.

Unfortunately the transition to these later, more difficult levels is a steel wall rather than a shallow incline. Even after Trials Fusion taught me some of the more complex maneuvers through a series of tutorials, success in the later levels felt more like luck after dozens of restarts rather than a mastery of the skills on-hand. Winning in Trials Fusion felt like a battle of attrition rather than a carefully-planned mission. "If I keep brute-forcing this one problematic jump," I thought, "eventually it'll work out for me."

This does not make for a satisfying victory.

Trials Fusion's dull presentation is just as unsatisfying. As previously mentioned, the game adopts a futuristic theme, but it's the most generic, neon-infused future you probably imagined before. High tech cities with silvery space ships and scienc-y factories filled with moving platforms make up the vast majority of the game's tracks. This runs in contrast to some of Trials Evolution's superior variety, where one minute I dodged shrapnel on Normandy Beach on D-Day and the next I attempted to raid a giant's stone tower without being crushed.

In what may be an effort to spice up the setting, developers RedLynx have added the very first storyline seen in a Trials game to Fusion. Yes, there's finally a vague explanation as to why you're putting yourself through all these deadly challenges. The storyline, related by a perky female AI voice-over, goes absolutely nowhere and features some truly awful writing, made more awful by its repetition every time you replay a level to try to complete it flawlessly (a requirement to unlock the late-game content). Merificully the voice-over can be turned off in Trials Fusion's settings in the first level without fear of missing out on anything but aggravation from then on. 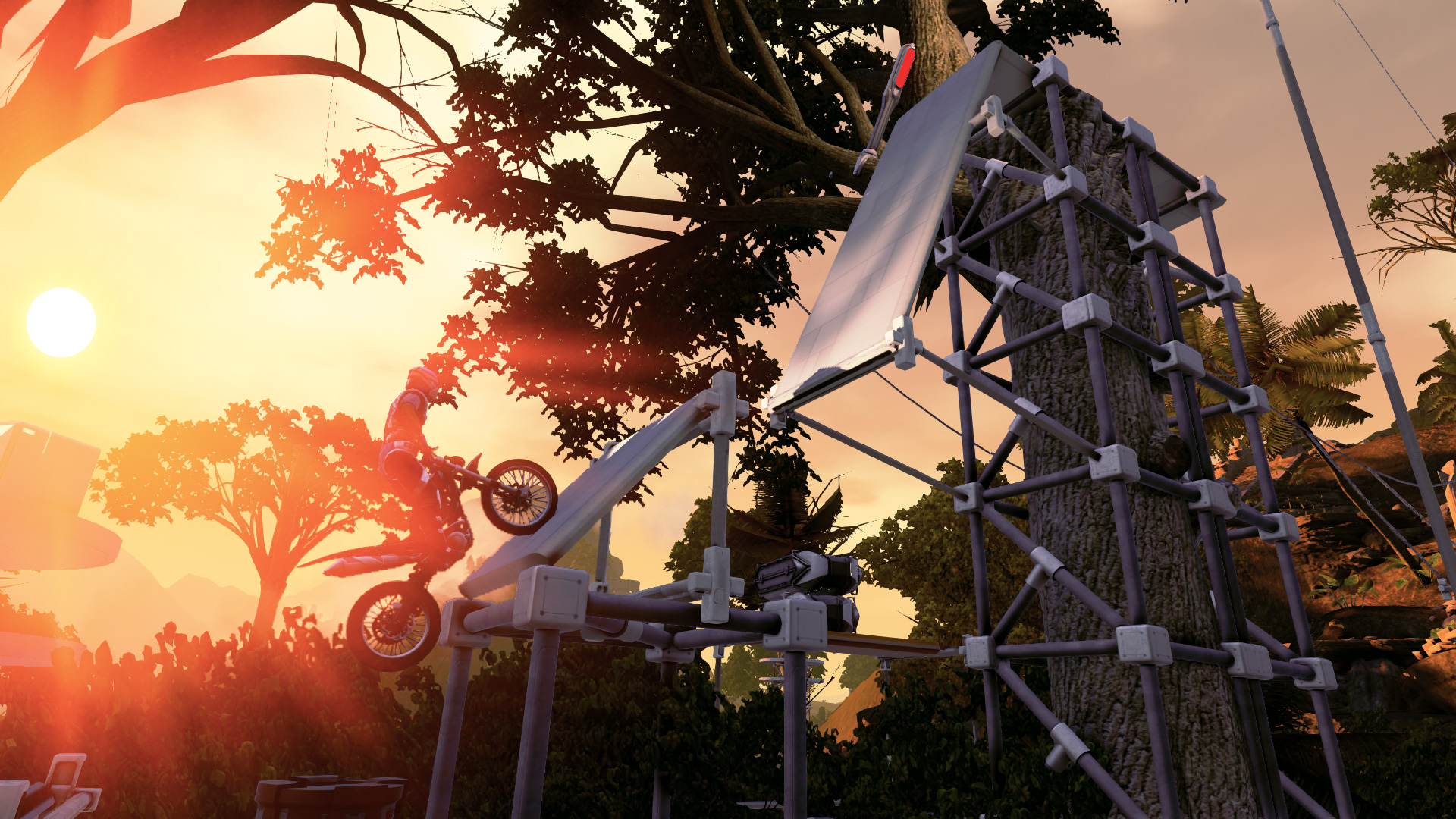 Trials Fusion is stymied by some glaring technical issues. The most noticeable of these arrives in the form of texture pop-in, as signs and background environments jump from blurry to sharp from one second to the next. Both the Xbox One and the PS4 versions of the game suffered from these issues. The Xbox One version had additional problems, as specific levels show harsh frame rate drops and screen tearing.

RedLynx has made other additions to the Trials formula with mixed results. An ATV is selectable on some of the game's missions, a heavier alternative to the easily-crashed motorcycles, though it doesn't feel different enough to justify its inclusion. There's also a brand new trick system, letting you use the right analog stick to pull off fancy, wheel-grabbing maneuvers while you're in mid-air. The trick system uses the physical movements of the driver to transition from driving position to the trick and back again. It's a neat technique but leads to some truly wonky moments where arms would bend in gruesome, impossible ways and tricks wouldn't register.

Meanwhile, functionality from previous games has been removed. The Skill Game Circus from Evolution is gone. In its place are a small handful of skill challenges with basic parameters like "complete the longest jump" or "go for as long as you can without using your front wheel." There are also some extras, like a tennis minigame against a penguin and a hidden rocket engine, but these just appear as small extras in individual tracks, rather than making up an entire mode. Online play is also gone from Trials Fusion, replaced by local multiplayer races. There's no question that this feels like far less content than Evolution, which launched at $5 less than the asking price for Fusion.

Fusion marks a step back for Trials

Every aspect ofÂ Fusion feels like a less imaginative experience that coasts rather than strives for something better.Â There's no question that the core Trials gameplay within Trials Fusion remains fun. But the host of missing features and bad design choices make it a Â significant step backwards after Evolution andÂ for the franchise.