By the time I reached the closing credits of Uncharted 4: A Thief's End, I never wanted to set foot into an ancient tomb or long-lost treasure trove with Nathan Drake again.

It's not that Uncharted 4 left me exasperated or unsatisfied. Quite the opposite, actually: A Thief's End presents a pitch-perfect conclusion to the Uncharted series, and should serve as a benchmark for other franchises approaching their twilight years. There are no threads left unresolved, no relationships left unexplored and no shirts left partially untucked. It's as cathartic an ending as you could hope for, and then some.

But that catharsis is built around a game that's so much more intimate and — shockingly — quiet than the other Uncharted adventures. The memorable, exploding setpieces the series is known for are sparsely used in Uncharted 4. Past games tossed Nathan Drake into a capsized boat or a crashing cargo plane, but in this final chapter, he's subjected to a far more dangerous ordeal: a thorough exploration of the fact that he can, at times, be kind of an asshole.

Uncharted 4 opens with an obligatory in medias res cliffhanger, but quickly pivots to show the life that Nathan and Elena — now reconciled as husband and wife — have built together in the years following Uncharted 3. The chemistry between the two characters, fostered by returning actors Nolan North and Emily Rose, is the best it's ever been. They're both given countless opportunities to do stellar character work, and every scene they share carries a lovely, hilarious, heartbreaking emotional payload.

Nate's retirement is interrupted by the return of his brother Sam, a former accomplice who was seemingly killed while on a job 15 years prior. Sam's life is in danger, he explains, and the only way he can be saved is if he and Nate pick up that job where they left off. Nate acquiesces, and, under questionable pretenses, sets off on his final adventure.

Uncharted 4 has the most cogent campaign of the series. There are no warlords seeking ancient weapons of mass destruction, no sunken cities with immortal mutant guardians — there's just the lost pirate colony of Libertalia and a literal boatload of treasure hidden within. It's a straightforward bounty, but it's refreshingly grounded, focusing more on the parties chasing Libertalia than some mystical MacGuffin waiting at the end of their quest.

Uncharted 4 is a game about the high cost of obsession. Everyone, from the pirate founders of Libertalia, to the first explorers who died hunting it down, to the game's current-day heroes and villains, is subject to the oppressive weight of their own unchecked ambition. As cautionary tales go, it's pretty nuanced, and a surprising turn from the franchise's earlier entries, which treated Nathan Drake's unquenchable thirst for adventure and glory as something resembling a superpower.

That ambition manifests in different ways. For the wealthy and ruthless Rafe Adler, it's a desire to prove his worth beyond his inheritance. For the mercenary leader Nadine Ross, it's the duty to satisfy a client and rescue her company from collapse. For Captain Henry Avery — a founder of Libertalia — it's the pursuit of redemption, as inspired Saint Dismas, the "Penitent Thief" present at Jesus' crucifixion.

The constant specter of ambition makes every character in Uncharted 4 — even the old pirate kings who died centuries ago, whose plights are detailed through copious journal entries — relatable. But it's also what makes Nathan Drake such a fascinating character in this, his final quest: His ambition isn't nearly as explicit as everyone else's. He's there to save his brother, sure, but there's something else pulling him along; something toxic, something that causes him to make terrible decisions with terrible consequences.

It's something that made me wonder if, just maybe, the Nathan Drake I've seen in this series is actually Nathan Drake at his worst.

Speaking of: Uncharted 4 still sees Drake mow down a few dozen platoons of nameless mercenaries throughout its campaign. That combat is totally serviceable — it's reminiscent of Uncharted 3's blend of stealth takedowns and cover-based gunplay, but with more fluid movement to allow you to weave between cover points more easily. But it's still the least interesting thing about the game; fortunately, battles are fewer and farther between this time around, and even the most climactic fights feel way less protracted than the exhausting stop-and-pop shootouts of Uncharteds past.

Of course, if Uncharted 4's gunfights weigh you down, you can spice them up with the game's biggest mechanical addition: a grappling hook you can attach to specific points. Most arenas have at least one grappling point you can latch onto, allowing you to swing to higher ground or simply blast foes while suspended from the ceiling like a piñata. It's dumb and dangerous, but it's inarguably more fun than engaging in battle on terra firma. 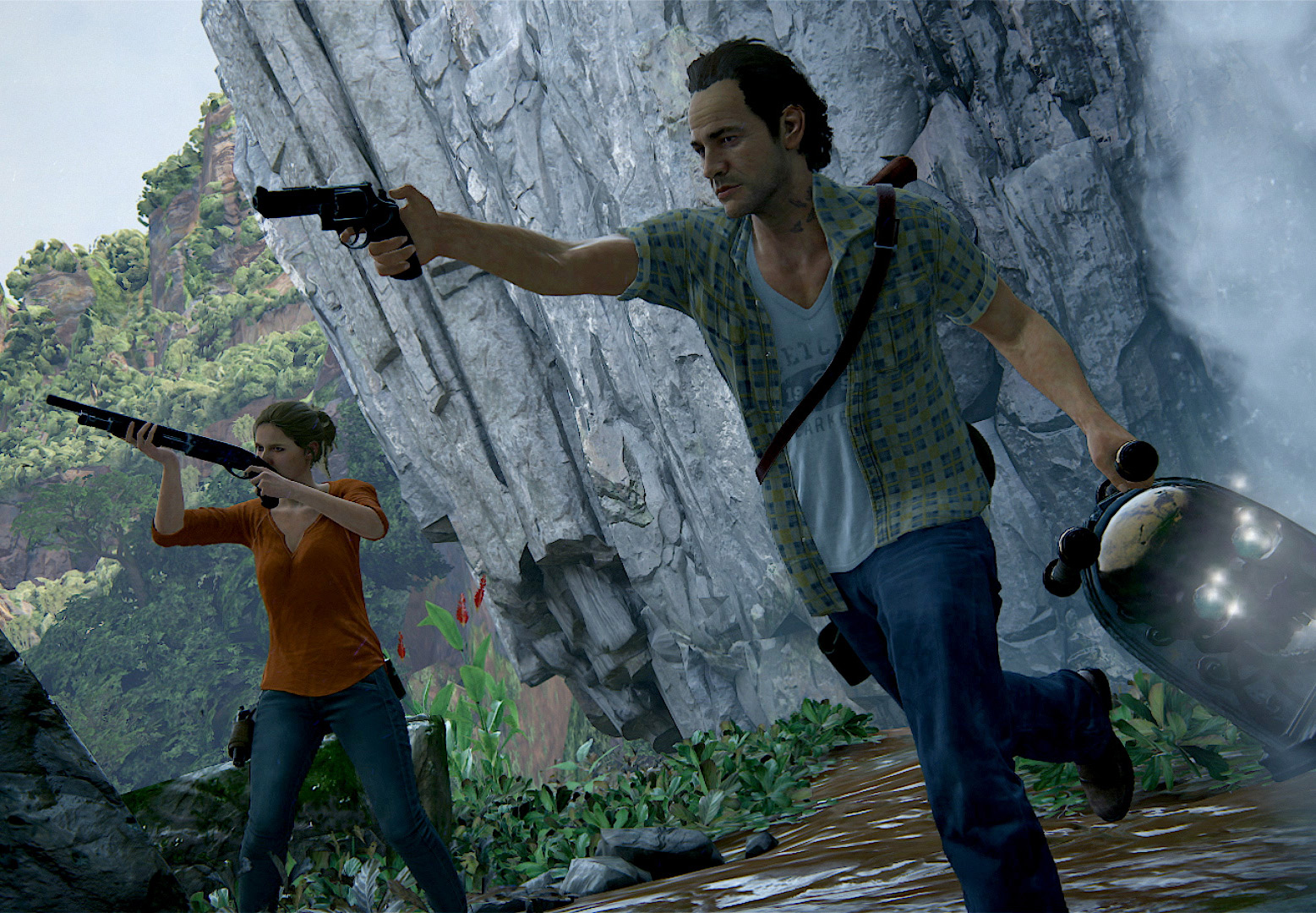 My time with Uncharted 4's online multiplayer component was limited to a few hours of matches in a pre-release session, but I really enjoyed what I had a chance to play. It's reminiscent of the run-and-gun competitive modes from the previous games, but with a larger emphasis on teamwork and survival. Taking too much damage puts you in a downed state, which a nearby teammate can revive you from, keeping the opposing squad from scoring off of your death.

That's not exactly a new concept, but it's enough to organically force players in Uncharted 4's multiplayer to stick together while leaping, climbing and — thanks to the addition of the new grappling hook — swinging all around the map, attempting to flank their opponents and gain higher ground.

Loadouts are also deeper this time around, giving you more ways to outfox your enemies, support your teammates or go lone wolf, supported by summonable AI soldiers and powerful, supernatural Mysticals. Those boons have to be purchased with in-game currency, which you'll earn based on your performance and by hurrying to the treasures that spawn all around the map, giving you further impetus to always stay on the move.

It was extremely easy to pick up on Uncharted 4's multiplayer component; within a few matches I was scoring big for my team, sneaking behind enemy lines with a covert cliffside approach or risky head-on grappling swing. With a bevy of unlockable loadout options and aesthetic upgrades, as well as plans for DLC that you'll be able to purchase solely with in-game currency, it seems like the tracks have been laid for the game's competitive side to have a pretty long tail.

The grappling hook also adds some much-needed variety to climbing. Swinging on a grapple point affords Drake a free range of motion, allowing you to leap to — or completely over — distant perches with superhuman magnetism.

Climbing feels more improvisational: Many ascents feature multiple routes, making it feel like you're carving your own path up a surface rather than following a preordained trail. But the game suffers from the occasional bit of mind-numbing environmental puzzle solving, nearly all of which involves rolling a box on casters — this game's equivalent to The Last of Us' ubiquitous floating pallets — under a ledge that's just out of reach.

That free-form design is echoed in several of Uncharted 4's chapters, which give you the ability to roam freely over massive, open environments, like a savanna peppered with explorable ruins or an archipelago filled with underwater cave systems. Tying those together are the chases, heists and puzzle-filled temples you'd expect from an Uncharted game. There's nothing quite as unforgettable as the setpieces from previous games — nothing approaches Uncharted 2's cliffside train wreck — but the overall pacing of Uncharted 4 fares much better than its somewhat uneven predecessors.

Uncharted 4 delivers a thrilling, moving conclusion to the series

But it wasn't the promise of bigger, more dangerous explosions that pulled me through Uncharted 4's campaign, which I completed ravenously over a two-day binge. It was a desire for Nathan Drake to just be done with it all: the killing, the lying, the recklessness, the selfish pursuit of fortune and glory. And that desire wasn't just me projecting my feelings onto a video game character — it's the arc that Drake and Uncharted 4 follow unswervingly.

There is nothing cheap about how Naughty Dog has decided to retire this franchise — no door is left open for a crass surprise sequel — and there's nothing ambiguous about its resolution. Every other Uncharted game has, to varying degrees, posed a question — "can a thief be good?" — and summarily moved on without wagering a guess. In finding an answer, Uncharted 4's story soars, and presents a moving, fulfilling finale.