Review and information for Nier: Automata

I had that high, that nervous energy, that hum in the back of my head that comes from an overtired brain trying to absorb an experience that was so much bigger than it initially seemed.

It’s a story I thought I’d heard before. It’s the distant future and the earth is in ruins. Machines have replaced mankind, and therefore they must be destroyed. Cue the ethical dilemmas, the friendly machines. Cue the crisis on a shattered concrete stage, and of course the swelling orchestra. Nier: Automata did give me a lot of what I expected, but it also gave me a lot that I didn’t. Even when I’d seen the twists coming there was always still some surprise, some little (or not so little) knot left for me to unravel.

This premise isn’t the only thing that felt familiar. Mechanically speaking, picking Nier: Automata up for the first time could result in déjà vu. Combat starts on the tried and true foundation of light attacks, heavy attacks, dodges and combo chains. Then there are the flight units, used sparingly for some of the bigger and more bullet hell-ish fights. Bullet hell-style gameplay (which generally involves dodging complex waves and patterns of enemy projectiles while fighting) figures into boss fights and hacking minigames quite heavily too. Though it’s not my favorite genre it never felt unwieldy, nor like it was getting in the way of more straightforward attacks.

As for equipment, weapons from swords to fists to spears can be found or purchased, then upgraded with the requisite materials to increase their damage as well as the length of their combo chains and the stat bonuses they grant when equipped. Player character 2B has multiple weapon sets that she can switch between on the fly, and she can likewise switch between multiple equipped programs for her pod (a sort of support drone that specializes in ranged attacks like missiles and lasers.)

That said, the bulk of your gear is not programs or weapons but chips — which even provide many of your UI functions. The mini-map is a chip, as is the HP gauge, as are items that will boost 2B’s attack power or allow for health regeneration. 2B starts with limited memory space and each chip has a cost, so early on I found myself unequipping non-critical UI elements to squeeze in that last upgrade chip. Memory space can be purchased easily enough, but even when it’s maxed out there will never be enough room to equip everything. I always had to weigh my priorities, though the ability to save different chipsets suited to different situations helped mitigate that.

Speaking of chips, playing on Easy difficulty (which you can change on the fly in the settings) opens up use of a special category called auto-chips. When equipped all together, the auto-chips allow players to hit the left trigger and essentially let the game fight itself. Functions like dodging, attacking, pod control, item use and so on are all automated so that little control input beyond the occasional nudge forward is needed during ground combat, flight combat, or hacking.

When I initially took the auto-play chipset for a spin it did not feel fun. I had a few hours of flashy and dynamic Platinum-style combat under my belt as 2B at that point, and just watching her do her thing without any input on my end was kind of boring by comparison.

Regardless, auto-chips are a massive boon in terms of accessibility. As they only take over combat functions, which is only one small part of what Nier: Automata has to offer, they leave players who would otherwise struggle with that combat for various reasons free to play without getting hung up. Since they’re divided up into their individual functions rather than being bundled together, players also have the option to take or leave whatever they need. If someone wants to manage their attacks but has trouble using their dodge at the same time, they can equip the dodging chip and leave the rest. Similarly if someone’s struggling with aiming their pod while also managing controls for 2B, they can equip a chip that lets their pod do whatever’s best in a given situation. Even for the more mundane use cases — maybe it’s 3am, maybe this boss is brutal, maybe it’s time to nurse the baby — auto-chips are a wonderful, player-friendly addition.

And there are a lot of reasons to play Nier: Automata beyond its fusion of melee action and bullet hell shooting.

It makes one hell of a first impression for one thing, seizing control of the camera to stage sweeping scenes that make 2B seem no bigger than an insect, then squaring her off against a living oil rig that feels bigger than the buildings themselves just to rub it in. And remarkably Nier only ever builds on that opening scene, moving from spectacle to spectacle, impression to impression, as if to say "Oh, you thought that last thing was cool? Well how about this?" Even after finishing the first ending and pursuing the others, the stakes kept rising.

There are a lot of reasons to play Nier: Automata beyond its combat and shooting

I should mention that, like other games in the series, Nier: Automata has several different endings. And if anyone takes anything from this review I hope it’s this: The word "ending" is meaningless. It’s not a suggestion of closure, it’s not even an ellipses. It’s a semi-colon. That first ending comes with a note from Square-Enix saying "we hope you enjoy the rest of the game" and that’s not a joke. It’s only after you’ve "finished" that things get really damn interesting.

And thankfully, Nier makes sticking with it worthwhile. It didn’t ignore the fact that I was retreading old ground. It kept my sidequest progress, my items, my upgrades and so on, not to mention adding enough new material that the amount of actual repetition felt negligible. It’s highly invested in maintaining player momentum, in giving them every reason to keep moving forward, and that made the pursuit of those "true" endings all the more satisfying for me.

If it wasn’t obvious, being a newcomer to the series didn’t hinder my appreciation for Nier: Automata’s story in the slightest. It’s true that the deeper you dig into the game’s lore (and even visual symbolism) the more everything from Drakengard to Nier comes into play, but Nier: Automata is self-contained enough that it fills in most of its biggest holes through endings and assorted unlockable bits. Even with a few pieces of the puzzle missing it does something very different, and very interesting.

It helped that I loved being in that world too, not least of all because of its music. Nier: Automata’s score is excellent, but it also adapts — instrumental and vocal mixes of the various songs interwove depending on what I was doing and where I was going. While initiating a hack, strings and drums start to subtly blur into blips and bloops, anticipating the full transition that would come if I succeed. When I ducked out of a crowded area into a calm passageway the vocals might drop out and leave me with a haunting tune that would swell back up once I slipped out again. Sometimes the surreal lyrics would instead shed their backing instruments as I moved between zones, following me like a ghost for a stretch before the next area’s theme would inevitably overtake them.

Nier: Automata does a lot and only seems to suffers for it in a handful of very small ways, the most glaring of which are its many invisible walls. Though you can double jump and mantle your way across the obstacle-riddled environments, there’s little distinction between climbable surfaces and unclimbable barriers even in areas that look like they’re absolutely built to be scaled. Its maps are filled with secretive nooks and crannies which makes the inevitable backtracking more tolerable, but actually accessing those spaces can be deeply frustrating, and the cumbersome 3D world map doesn’t offer much help in that regard. After two dozen hours I still struggled to know where I could and couldn’t go, and finding the correct path up or down occasionally involved the equivalent of beating my head against a wall until one of the two finally gave.

If that’s my biggest problem with it after clearing each of the game’s five core endings, that should say everything. Nier: Automata is a game that’s more than willing to make players feel small, both physically and conceptually. It wants to swallow them whole, and it succeeds. Nier demands patience with its antics — not to mention its definition of "ending" — but it’s patience was rewarded.

Our review of Nier: Automata 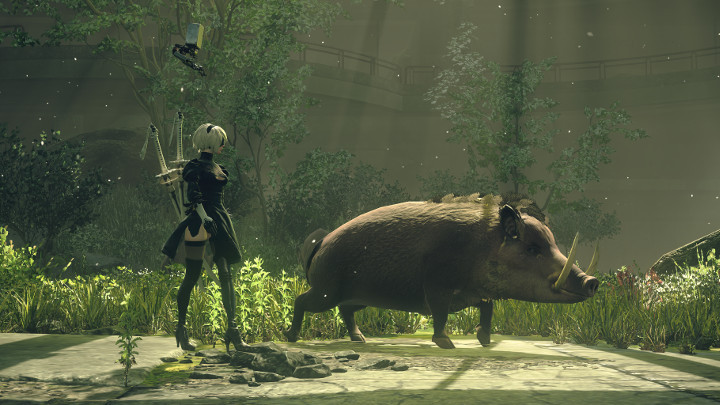