It’s fitting that one of the recurring themes of Metal Gear Survive is making do with what you have. In Konami’s follow-up to Metal Gear Solid 5, you, as a nameless hero, band together with a group of survivors amid the wreckage of Mother Base with the hope of returning home.

Series creator Hideo Kojima, who made Metal Gear games with publisher Konami for close to 30 years, wasn’t involved in the making of Metal Gear Survive. That makes Konami’s latest game, which recycles many of the locations, assets and gameplay mechanics from The Phantom Pain, akin to sacrilege to longtime Metal Gear fans. Metal Gear Survive trails a fantastic but flawed game that closed the loop on the three decade-long Metal Gear saga and the result turns out to be an inessential entry in the series.

After revisiting a key moment from Metal Gear Solid 5: Ground Zeroes, this time from a different perspective, players find themselves thrust into a strange world called Dite, a barren version of Earth infected by a zombie-like plague and choked with a toxic dust. Players must quickly scavenge for food, water and weapons to protect themselves from monsters called Wanderers, walking dead soldiers transported to Dite from Mother Base.

The early hours of Metal Gear Survive, when food and water are scarce, and infectious diseases are potentially just a gulp away, are grueling. I was armed with little but a spear and other crude defenses, and forced to subsist on raw meat and dirty water until I could scavenge the resources needed to build a base with the basics: a campfire to cook, a pot to boil clean water, workbenches at which to build gadgets and increasingly powerful weapons. Early missions are a mix of desperately scrounging for food and hunting down memory boards for your talking computer ally, Virgil, a wackier, split personality version of HAL-9000.

Later, Survive tasks the player with rescuing other characters who have been transported to Dite through a trans-dimensional wormhole and reclaiming abandoned bases, which house wormhole transporters that enable fast travel. This is where Survive plays its best, when stealthily approaching bases and dispatching enemies with silent kills. It’s the closest the game comes to the enjoyable open-world sandbox Kojima Productions crafted for The Phantom Pain. Unfortunately, much of the remaining gameplay centers around building defenses and fending off waves of Wanderers. This is accomplished by building walls and fences that block the zombie-like creatures from forcing their way into bases and destroying the precious wormhole generators (or energy-mining drills) that you need to protect to progress.

These moments, when you’re fighting for your life with limited ammunition and supplies against a flood of angry zombies, can be thrilling. But as the game progresses, and even as your abilities and arsenal evolve, the action doesn’t change much, and the fight for survival starts to feel repetitive. While your survivor eventually learns how to build new tools and develop new resources — acquired by finding recipes and raw materials throughout Dite — the mechanics never progress in the same interesting fashion they did in The Phantom Pain. In that game, the player has a wealth of weapons, tools and tactics at their disposal. Enemy forces learn to counter your evolving weapons and strategies in The Phantom Pain, something not replicated in Survive, which has only a handful of enemy types.

While Metal Gear Survive doesn’t offer the same allure of ever-evolving tactics that The Phantom Pain gave players, it certainly borrows plenty from Kojima Productions’ last game. Dite lifts elements of The Phantom Pain’s Afghanistan and Angola maps wholesale. The map is populated by the same flora and fauna, and Konami reused certain structures that will look very familiar. There’s an in-game justification for these repurposed assets reappearing, naturally, but too much of the game feels like a copy of another work.

Survive also revisits the Mother Base-building and personnel management elements of The Phantom Pain, letting players customize their base with resource production facilities. They can assign staff, composed of other survivors the player rescues in Dite, to manage it while they’re away on missions. Base management alleviates some of the aggravation that comes from hunting for food — you can build vegetable farms, rainwater tanks and medicinal herb gardens — but I found the mechanic didn’t really open up until after I’d completed the main story, at which point I was happy to end my visit to Dite.

Metal Gear Survive’s single-player campaign is a bewildering, cheesy trip. It’s full of twists and turns, some of them genuinely surprising. Others are earnestly bizarre. But Survive’s story is also often lazy and hamfisted, feeling like a multipart episode of a desert island sci-fi show (a la Star Trek: Voyager or Lost), as the game dangles the promise your crew will make it home only to repeatedly yank the rug out just as rescue feels imminent. The story ends in such a way that the events of Survive feel completely pointless, and though you accomplished a seemingly impossible task, nothing’s changed.

There was at least one major surprise in Metal Gear Survive, however, that helped me overlook the game’s narrative silliness: the game’s chief antagonist. Designed by artist Masahiro Ito, the creator of the Silent Hill’s iconic Pyramid Head and bobblehead nurses, the big bad of Metal Gear Survive is an unexpected terror that establishes the game as more of a stealth-horror hybrid. That enemy is also the justification for inserting an actual Metal Gear into a game that otherwise barely warrants the series’ namesake.

Metal Gear Survive’s single-player is only part of the experience. A few hours into the game, players unlock co-op Salvage missions with teams of up to four players. The goal in Salvage missions is similar to many of the base defense missions in the campaign: protect a drill as it extracts energy from Dite, while hundreds of zombies claw their way toward it. Teaming up with other players in a frenzy of building, defending and zombie-killing feels rewarding and empowering. It’s an enjoyable diversion from the lonely monotony of Survive’s story, where you spend much of your time simply trying to stay alive against difficult odds, but doesn’t feel essential.

For a game that was originally presented as an online multiplayer survival game, the cooperative portion of Metal Gear Survive feels like the less interesting half of the experience. It’s inextricably linked to the single-player side — whatever you’ve earned in the campaign carries over to co-op, including your hunger and thirst levels, and vice versa — and is, at times, an enjoyable way to quickly earn heaps of loot. But after roughly 20 hours of repetitive base defense gameplay during the campaign, doing the same thing again in a multiplayer session held little appeal for me.

Metal Gear Survive’s greatest fault is its lack of variety. It’s built on the bones of The Phantom Pain’s broad and deep gameplay structure, but does little to improve or remix that formula in interesting ways. Players have a small selection of weapons to choose from, and the game’s character upgrade tree mainly focuses on developing skills based around melee weapons and close quarters combat techniques. I played most of the game using either a spear or a bow and arrow to slay thousands of zombies, so many of the weapon and gear upgrades I received felt useless to me.

Konami has also stuffed the game with a dozen or more ways to spend in-game currency, which players can buy for real-world money. Some of those in-game purchases are commonplace upgrades, like emote animations or experience boosters, but others feel more onerous, including locking additional save slots behind a paywall. Others border on being gross: Players can only send out one deployment crew — a detachment of survivors who scour the wasteland for materials — for free. If you want to a slot for another crew, that’s 1,000 SV Coins, which roughly translates to a $10 in-game purchase.

Metal Gear Survive doesn’t offer enough for players to do over the course of the 20-hour campaign, and lacks much of the complexity of its predecessor. There are no helpful “buddies” to take along with you on missions to tailor the game to fit your play style. There is little in the way of empowering weapons or gear to offer a meaningful sense of progression. There’s no quirky competitive multiplayer in the vein of The Phantom Pain’s fascinating but flawed FOB invasions. There’s not much of a reason Metal Gear Survive deserves the Metal Gear name.

Metal Gear Survive is a disappointing divergence for the franchise

There’s a weird, enjoyable story in Metal Gear Survive for players who make it past the game’s grueling opening hours, and there are flashes of a great survival game. But with a threadbare connection to the 30-year history of Metal Gear and a comparatively shallow game made in the shadow of The Phantom Pain, it’s hard to recommend enduring the whole thing.

The creative spark that fueled Metal Gear Solid 5: Ground Zeroes and The Phantom Pain no longer burns in Metal Gear Survive. The end result feels like little more than an effort to amortize the cost of the Fox Engine and a pair of very expensive Metal Gear Solid games.

Our review of Metal Gear Survive 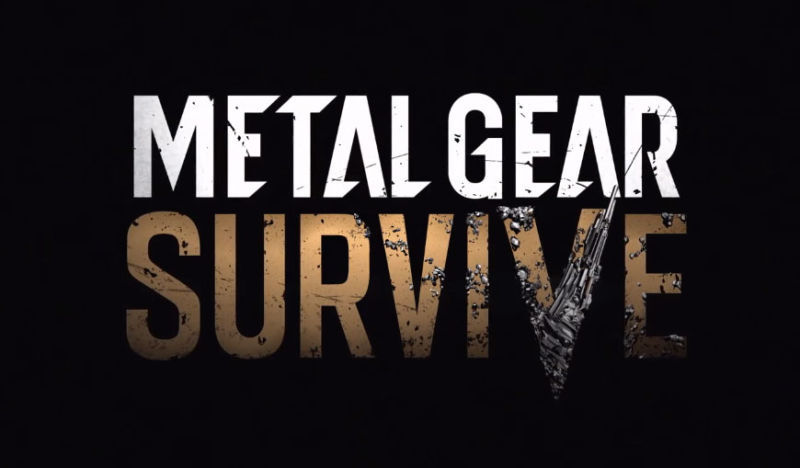