As the series’ first major outing on Switch, Kirby Star Allies seems like the kind of game that would have been designed with an eye toward pushing Kirby into the future. It isn’t, though. Instead, it comes off as something closer to a recap of 25 years of Kirby history. It pulls together well-worn themes and elements while leaning on two key factors to make it feel fresh: high-definition graphics and four-person multiplayer.

Yes, somewhat surprisingly, Star Allies marks the first time HAL Laboratory and Nintendo have published a traditional Kirby platformer in HD. (The core Kirby games skipped Wii U altogether, with only the wonderful but decidedly nontraditional Kirby and the Rainbow Curse repping the franchise on that ill-starred console.) There’s no denying that, as with every classic franchise, experiencing familiar characters and beats through glossy high-fidelity visuals has a certain compelling charm all its own. In that sense, you can almost see Star Allies as the series pausing to take stock before leaping ahead. There’s a lot of water being treaded here.

The first two worlds that appear in Star Allies — of four total — take players through the familiar turf of Grass Land and Planet Popstar, where you’ll hoover up series regulars like Waddle Dee and Poppy Bros. Jr. en route to predictable showdowns with the likes of King Dedede, Whispy Woods and Meta Knight. The back half of the game changes things up a bit, but you’ll still be working with familiar skills and mechanics even as the environments grow decidedly more cosmic in nature. (Kirby facing off against eldritch horrors from the depths of space is pretty old hat, for that matter.) Compared even to the recent Kirby: Planet Robobot and its wild giant mech-suit sequences, Star Allies plays things incredibly safe, even as Kirby games go.

Were the leap to HD graphics the entirety of Star Allies’ additions to the Kirby universe, it would be a pleasant but totally missable blip in the series’ history. Instead, its real hook is hinted at in the title: Star Allies is all about the power of friendship. In this adventure, players have a single button used exclusively for befriending enemies, the most charming dedicated command since A Boy and His Blob’s “hug” button. Toss a heart icon at a monster, and it’ll become Kirby’s partner in action. You can even turn most midbosses into your pals. Once you unlock secret “Dream Palace” stages, you can summon those friendly rivals into action through a character roulette.

Whichever critters you ally yourself with, you can bring along up to three monsters as Kirby’s companions. They’ll help out to the best of their ability as computer-controlled characters. It’s a cute feature, but what makes Star Allies truly compelling comes from the way it uses these companions to enable drop-in-drop-out cooperative play for up to four people. This isn’t the first-ever multiplayer Kirby game, or even the first four-player Kirby platformer. However, the differences between Star Allies and its predecessors take advantage of the Switch’s strengths as a multiplayer device. They also offer a great example of how Nintendo’s approach to cooperative gaming has evolved over the years.

Kirby’s first team-up with three allies, 2004’s The Amazing Mirror for Game Boy Advance, ended up being a total mess. All four players needed to own separate cartridges and systems, and they had to juggle link cables in order to connect their devices. After all that, the free-roaming design of the game resulted in very little actual cooperation. Star Allies, on the other hand, carries forward the Switch’s philosophy of versatile, adaptable multiplayer: One to four people can jump in easily by popping out the Switch kickstand, and the only accessory needed for a maximum multiplayer session is a second set of Joy-Cons. Everyone plays together in the same space, so a group session of Star Allies does play better on a large television than on the built-in screen: The sheer amount of stuff going on at any given time reads a lot more clearly on a full-sized TV. Even so, the important thing to know is that teaming up in Star Allies is a more or less seamless affair. Once Kirby makes some in-game friends, the first player’s real-life friends can hop in and play anytime.

It’s here we see Star Allies pick up and run with Nintendo’s love for asymmetric multiplayer gaming. Back in The Amazing Mirror, all four players controlled a rainbow pantheon of Kirbys. This time around, there’s only one Kirby, and that’s player one. Everyone else plays as whichever enemy creatures have been converted into friends, meaning they don’t have access to Kirby’s suction powers. While any and everyone can toss heart icons to create a friend, Kirby’s heart power adds a new recruit to his host of allies, whereas a support player’s heart ability will transform the character they currently control into the target monster. Similarly, the action simply keeps on cruising when players two through four fall in battle, but when player one — that is, Kirby himself — dies, it’s back to the checkpoint for everyone. The action is always centered on Kirby, so anytime someone else strays off-screen they’re warped back to player one’s position.

Everyone is granted the freedom to assist or antagonize, according to their preferences

This leads to a slight imbalance between characters, but the minor difference between player one and everyone else makes Star Allies a great vehicle for one of Nintendo’s favorite use cases: an experienced player teaming up with younger or less skillful companions. As family-oriented games, Kirby adventures tend to skew toward the easy side, but there’s definitely enough happening here that the action can be a little overwhelming for someone who lacks familiarity with the mechanics of the Kirby franchise. Making Kirby himself a unique character here, one responsible for carrying the bulk of the action, allows one player to shoulder the burden of advancement. Everyone else can contribute while enjoying room to learn ... or just to goof around. There’s plenty of that: Kirby can suck up other player characters to pull them out of action for a moment, and any player can hop on another ally’s head to take control of them like, well, Yoshi. The multiplayer dynamic here feels a lot like the four-person New Super Mario Bros. iterations, with everyone granted the freedom to assist or antagonize, according to their preferences.

It helps that Star Allies’ play mechanics contain more intricacy and complexity than its breezy difficulty might suggest. As usual, Kirby can copy his enemies’ powers by swallowing them, but now he’s able to combine powers with those of his friends. These skill permutations generally boil down to enhancing a physical attack with elemental attributes (e.g., an ice sword or fire whip), but most of the hidden collectibles and secret level entrances in the game can be unlocked only with combo powers. All players can make use of combo powers, and you can grant computer-controlled allies these boosts as well. The AI turns out to be pretty smart about using fusion abilities when appropriate, which frees up players to make use of their favorite powers rather than limiting them to whatever a given situation demands.

The huge range of combo skills that Kirby and his newfound friends can wield helps compensate somewhat for the disappointing fact that Star Allies doesn’t appear to offer any new powers to acquire. The attacks you can copy here have been standards since the days of the NES and Game Boy — again, Star Allies falls short when it comes to exploring brave new frontiers for the Kirby concept. It’s fun to recruit classic enemies like Bonkers (a gorilla with a hammer) or Meta Knight into your party, but the handful of new bosses that appear in the second half of the quest prove immune to Kirby’s charms. There’s no way to press them into service.

Star Allies’ “puzzles” require combination powers to solve, but they’re usually accompanied by little signs that tell you which powers to combine. Additionally, all of those powers appear either within the puzzle room or in its immediate environs. It’s only the very final stages that you encounter a few tricky multistep puzzles that demand you apply more than the most rudimentary level of consideration to completing them. Likewise, the showy special team-up moves (which allow you to smash up the stage or guide key-carrying critters to locked doors) require little actual thought until the final few stages. In other words, the systems and cooperative play ideas in Star Allies have a lot of potential, but the game never quite realizes that promise. The rather brief quest ends right as the level design begins to come into its own, and without any sort of postgame material to explore, Star Allies simply leaves you wanting more.

Still, while it lacks the substance to properly satisfy longtime Kirby fans, Star Allies does at least seem genuinely earnest in its underlying belief in the power of friendship. The game is frequently chaotic and a touch under-baked, but it’s hard to be too upset at a game where you can break down long-standing bonds of enmity and heal foes with a kiss. Even if it’s on the brief and simple side, Star Allies demonstrates the polish and personality you’ve come to expect from the series. It’s a kid-friendly romp through the franchise’s most memorable moments, and the asymmetric gameplay and lively spirit of Kirby’s latest journey make it a great way to introduce a new generation of fans to the series.

Our review of Kirby Star Allies 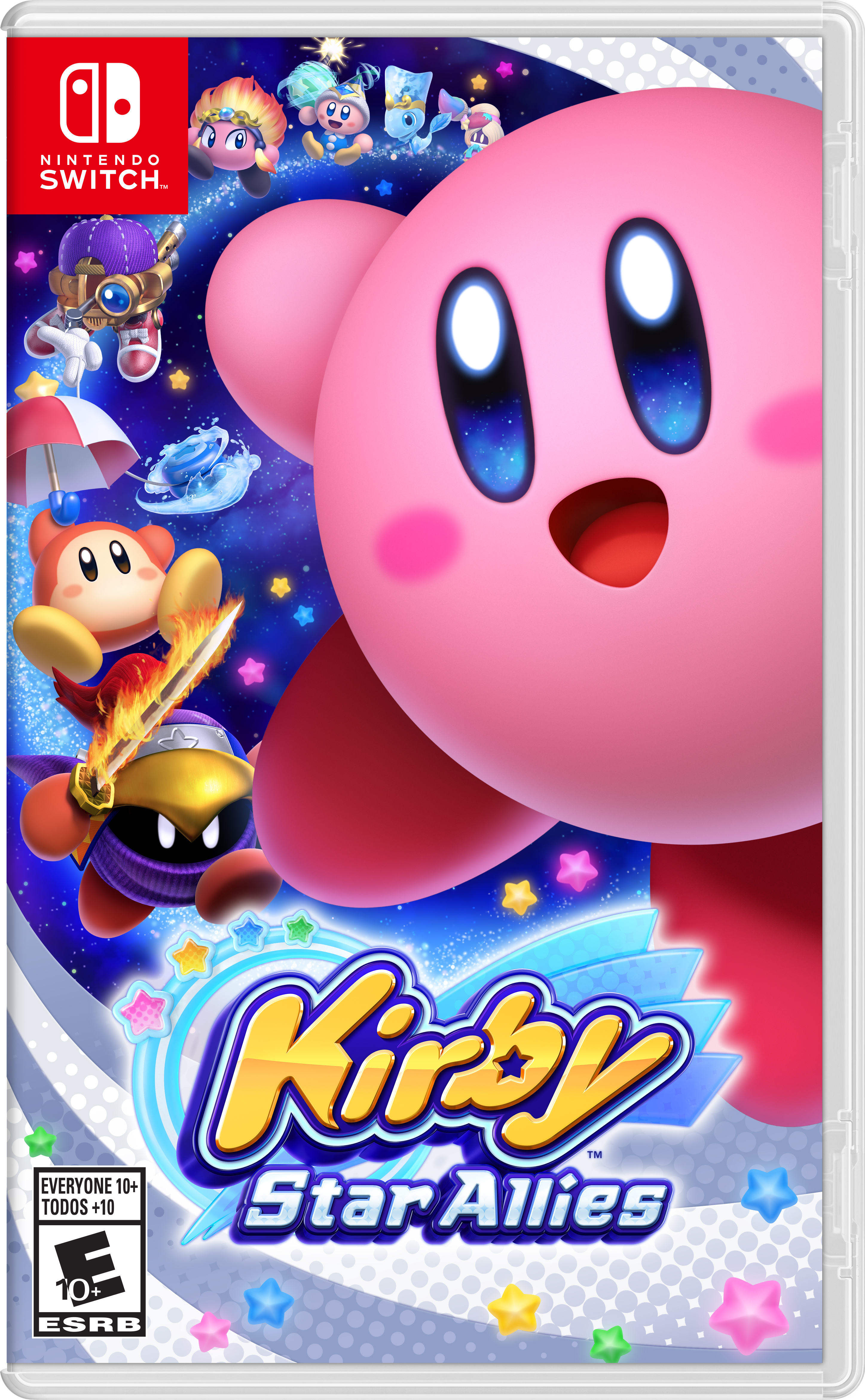