A small step for a mouse, a giant leap for VR

Review and information for Moss

When I think of storybooks, I picture gilded lettering, watercolor landscapes and secretly, a cast of cute animals. Polyarc’s Moss on PlayStation VR doesn’t just show you all of that, it lets you live it — or as close as you can, anyway.

For a game centered so much on storytelling, Moss’ technical prowess and rich world-building do most of the talking. While VR can be challenging to acclimate to (thanks to motion sickness and often clunky controls), Polyarc found a way to tap into what feels natural and then some. Clever use of perspective and three-dimensional sound blend together to create an experience that seems real, even if it’s not always successful at achieving that.

Moss consists of a mix of puzzle platforming and a fully narrated story. It begins at a table in a great hall — not unlike the one from Hogwarts — with a large book. Using the DualShock 4 motion controls, you open it and begin flipping through the pages. A narrator’s voice pipes up, and the story begins: A tiny mouse named Quill is on a quest to save her uncle, after their kingdom was overthrown by a fire-breathing snake. From there, you’re actually transported into Quill’s world, where you’re known as the Reader, a powerful force that the residents of Moss are able to sense but not see.

Both first-person and third-person gameplay is involved. You move Quill with the left analog stick while, as the Reader, searching for opportunities to help her out. Motion controls allow you to clear paths for her or help make new ones. When I moved blocks and other objects, I couldn’t help but feel like a wizard. Holding down the trigger button while pulling an object this way or that illustrated its path in a wisp of light, as if from a magic wand. Other times, I’d slowly raise my arm and watch a beautiful staircase rise from the ground, blooming in stone steps. Every gesture I had to make in order to solve a puzzle felt organic and natural.

Even tiny things, like using the three-dimensionality of the VR headset to peer into another part of an area, highlight Moss’ greatest strength. Polyarc committed to illustrating every detail, and that shines throughout the game. You explore one self-contained area after another — each scene is essentially a diorama. There are tiny libraries, mouse-sized pubs and forests that I paused to marvel over.

Exploring these areas made me feel like I was finally fulfilling a childhood dream to live inside a fantasy RPG. Wherever I was, I made it a point to look behind and around me, and doing so in VR is Moss’ most breathtaking feature. The lighting and environmental design convey a sense of space and depth that make it easy to feel like you’re actually inside this world.

I would do anything for Quill

A lot of these immersive qualities come from Moss’ successful marriage of visual and sound design. There’s something magical in how the audio syncs up with the animations on screen. The sound of each page turning, for example, matches up delightfully to the texture, size and thickness of the book. But it really comes to life inside buildings: the faint whisper of wind while exploring a cavernous temple, the scratching of Quill’s paws as she leaps from one ledge to another. Moss’ use of 3D audio is instrumental in elevating this from a simple adventure told within VR to a true virtual reality.

Best of all is Quill, the lovable lead. When I was first able to interact with her directly, I was struck by how delicate and fragile she seemed; she was so much smaller than I expected her to be. It felt like if I sighed too hard, she’d blow away. She waved to me, bowed toward me and thanked me when I healed her, and I felt my heart melt. If you’re stuck, she’ll get your attention and try to give you a hint. At one point, she even gave me a high-five.

By the game’s end, I had decided I would do anything for Quill. I would die for her.

Shortly after our introduction, I navigated Quill down a path that was winding up and over to the next area. I was surprised to find myself craning my head to the side and leaning forward to make sure she was getting there alright. So many times during Moss, I felt like a mom watching her kid go off to the school bus.

Even with the PSVR headset’s limited range of motion, I found hidden items and details that I would’ve missed had I not stood up (sometimes on tiptoes!) or adjusted how I was sitting. When going through a temple, I was able to lean forward from where I was sitting and look left and right to see neighboring chambers. Sometimes I’d be looking up at Quill from a dip in a ravine. Other times, I was cozily tucked into a stone alcove, perpendicular to a long hallway with heroic statues. Every scene seemed as if it were set up by a thoughtful cinematographer.

Moss encouraged me to move around and actually rewarded me for my curiosity, something I haven’t seen in other VR games. I was so enamored with this idea that I probably took longer than I needed to finish this game.

The game shines in quiet moments like these, but its more active parts can be frustrating. Combat is rare, but when it does appear, it ramps up quickly and without warning. Expect to see clockwork beetles and crustaceans with blasters for claws coming out of dark doorways and crevices. Moss does little to prepare you for anything more than a few of these critters coming toward you, which makes the occasional horde difficult to manage. Quill can only do basic attacks and a dodge, which can feel constraining if she’s overwhelmed with enemies on all sides.

There’s also an option to “control” one enemy at a time by selecting it and moving it around. Beetles can be moved and placed on switches, but the crabs can shoot fireballs if you aim and release the right analog stick. In this way, Moss demands a specific type of multitasking, but doesn’t make that clear until later on. Controlling two characters at the same time while dodging enemies was a daunting task, especially when there was little to no combat to prepare me for waves of enemies. Moments like these were also where the PlayStation Camera could be finicky, especially since you have to select and hold Quill for a set time to heal. I found myself waving the controller around in a frenzied attempt at recalibration, only to be cornered a half-second later and killed.

Moss is not so much a game as it is an experience. Polyarc sets an immensely high bar for storytelling in VR, exuding careful and deliberate artistry in every aspect — sound design, lighting, camera, visuals — to create a world worthy of straining your back to see the area in 360 degrees. In every sense, I felt like I was inside one of those beautiful, gilded storybooks. The only thing missing was the smell of the forest and old paper.

Our review of Moss 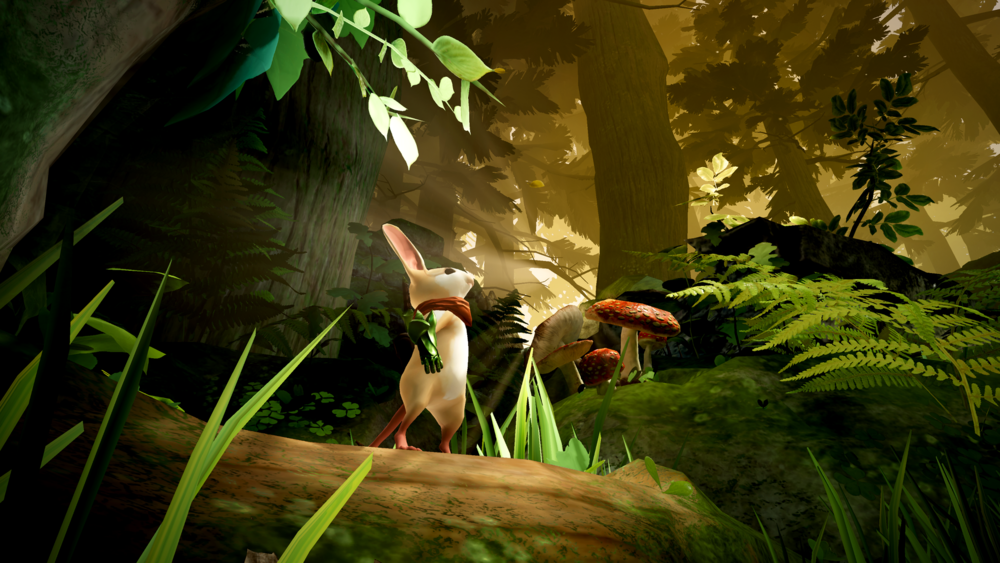