A trip through the horrors of medieval times

Review and information for Apocalipsis: Harry at the End of the World

Medieval ideas thrum madly throughout Apocalipsis: Harry at the End of the World, a puzzle game drawn in the style of 15th-century wood engravers such as Albrecht Dürer. Its visual language is a dark rhapsody to Dante’s Inferno and to the Book of Revelation. In every scene, fear manifests in the prancing garb of pestilence, torture, war and famine. Weird monsters abound.

Apocalipsis is a point-and-click puzzle game in which the hero, Harry, sets off on a Candide-like quest to rescue his beloved girlfriend. In each puzzle, he encounters some new abomination. Cadavers hang from skeletal trees. Dead animals rot in the sun. Witches scheme black masses.

The puzzles themselves follow a general pattern of collecting and applying stuff scattered throughout the world, often garbage or discarded tools. Completing a puzzle allows for progress. Mostly, the puzzles are about visual logic and the problem of patterns. Occasionally, they veer into the maddening, but never so far as to escape resolution.

Wood-and-rope technological advances of the Middle Ages are plundered for ideas. So we figure out how to use winches, how to navigate the stars, how to bombard a city. I make a ladder out of the bones of the dead. I slay a sea monster with a heavily modded cannon. I repair the rudimentary plumbing of a castle. I make sense of a pipe organ.

There is an undeniable attraction to all this carefree pessimism

Harry moves through the game, cut from the same cloth as a manuscript peasant. He has that resigned look of the perpetually damned. Nothing can surprise him, and this creates a fatalistic humor in his labors.

Like Don Quixote, he is both a naif and a hero. Possibly, he has lost his mind. Harry’s animations are slow and unhurried, as you might expect from a lad of the furrows and hedgerows. This can sometimes feel a little too slow, especially when his “I don’t know what this means” pantomime plays out for the umpteenth time.

Still, the story progresses pleasingly. Each puzzle feels like a tiny world of pain, resolved and left behind as Harry moves on to the next horrible challenge.

Throughout the game’s three-hour run, we reacquaint ourselves with hideous beings like that dude with his face in his torso, or the creatures of the deep, or the Whore of Babylon, or the pathetic specters of the tortured, encased in demonic machines. There’s a beauty in its ugliness. Or perhaps it’s the other way around. Either way, it’s all so grim, you can’t help but smile.

There is an undeniably modern attraction to all this carefree pessimism. Apocalipsis is about the end of the world, and yet it’s a love story that magnifies the personal over the universal. This gives it an aura of truth that the wood engravers of the 1400s might have recognized. Artists of the Middle Ages understood horror, because they lived in its reality of plagues and brutal wars. They saw the world through superstition and biblical fiction. Yet they wrought art and literature that brought the fantastical down to earth. They saw their world as doomed, while celebrating big, human themes, like love, loyalty and romance.

We can feel connected to them through a game like this. The medievals just knew they were fucked, because the mysterious forces of nature and the evils of men were a constant source of apocalyptic proof. Yet still they insisted on reworking and re-representing the world. We, facing unprecedented and barely understood natural upheavals and political implosions of our own, have good reason to understand how they felt.

Apocalipsis takes its cues from an often neglected corner of Western cultural history, remaking fantastical woodcuts into a convincing, amusing and engaging world. Its puzzles, its art and its atmosphere feel authentically medieval, while its story splashes in the dark waters of stoicism.

Our review of Apocalipsis: Harry at the End of the World 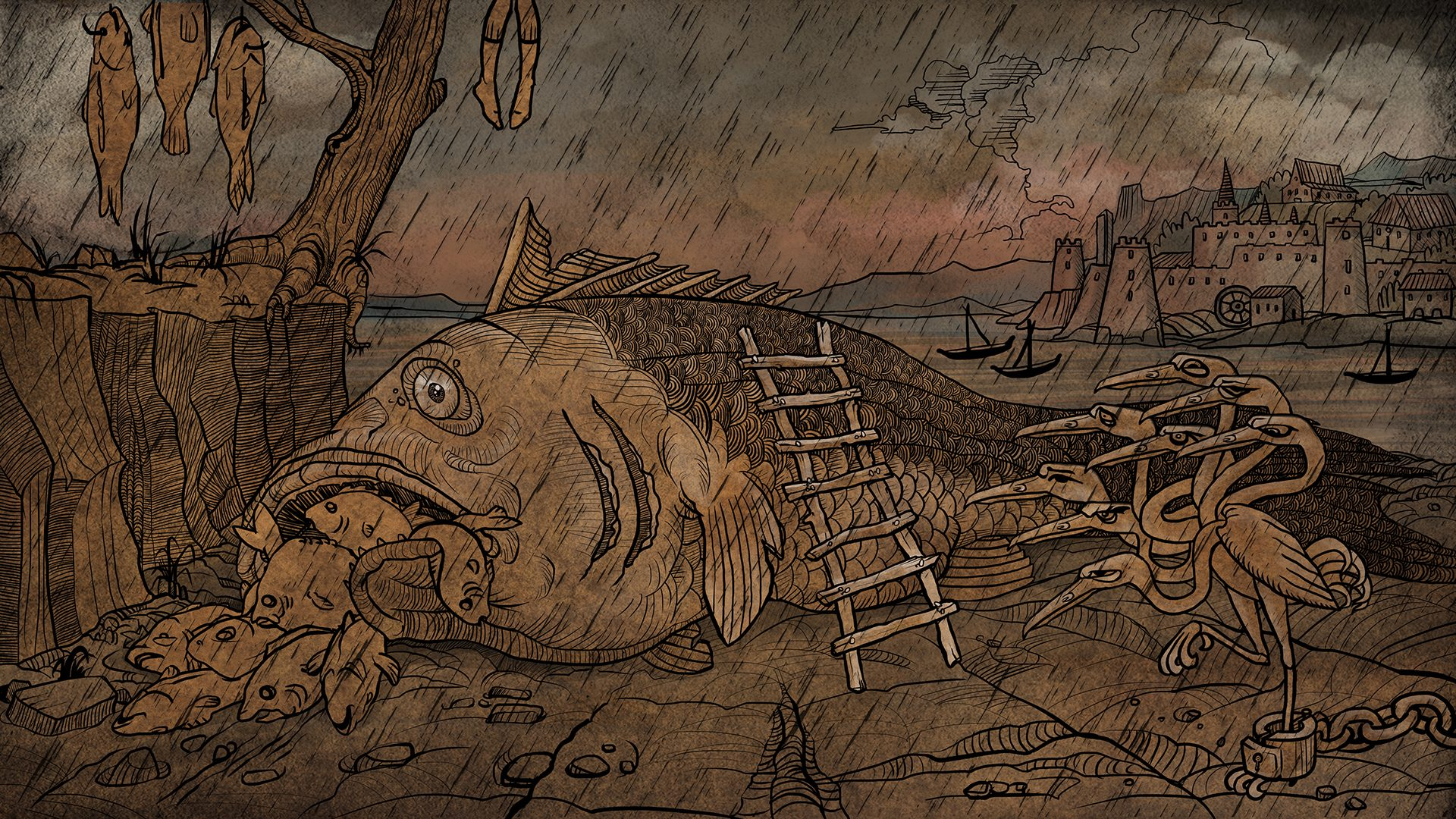