Go behind the box scores of His Airness’ greatest performances

Share All sharing options for: All 15 games of NBA 2K23’s new Jordan Challenge

NBA 2K23 will bring back the series’ celebration of Michael Jordan’s greatest feats with The Jordan Challenge, adding five more games to the original set of 10 that NBA 2K11 offered 12 years ago.

“This was a passion project for me,” said executive producer Erick Boenisch, a 20-year veteran of Visual Concepts who has worked on all but three games in the series. “I wanted this to be head and shoulders above NBA 2K11’s Jordan Challenge in every way possible.”

Boenisch and gameplay director Mike Wang leaned hard into the history and context of each moment in Jordan’s career, in hopes of making it come alive for a new generation of basketball fans who may have never seen him play.

“Mike Jordan” was just the fourth freshman in North Carolina basketball history to start in his first game for the Tar Heels. The 6-6 swingman from Wilmington Laney High School cracked a Tar Heel lineup that included future Hall of Famer James Worthy and three-time all-American Sam Perkins. In the 1982 NCAA final against Patrick Ewing and Georgetown, Jordan buried an 18-foot jumper with 15 seconds left to give UNC a 63-62 lead and Dean Smith his first national championship, after six Final Four appearances. Jordan’s No. 23 is one of seven numbers fully retired from service at Chapel Hill.

Prelude to a Dream

The United States’ men’s national basketball team opened Indiana’s brand-new Hoosier Dome with a scrimmage against a team of NBA stars that included Hall of Famers Robert Parish, Kevin McHale, and Larry Bird of the Boston Celtics. The crowd of 67,596 was the largest to see a basketball game in the U.S. at that time; President Ronald Reagan addressed the team and crowd in a recorded speech played on the arena scoreboard. Jordan scored 14 points in this game, which the collegians won 97-82. He would reunite with 1984 Team USA teammates Ewing and Chris Mullin on the 1992 “Dream Team,” the greatest assembly of talent in basketball history.

The Chicago Bulls selected Jordan third overall from a 1984 NBA draft whose top five included future Hall of Famers Hakeem Olajuwon and Charles Barkley. In 1986, the Bulls were 30-52 and seeded eighth against a powerful Celtics team steaming toward that franchise’s 16th NBA title. Although Boston overpowered Chicago 135-131 in the second game of the first-round series, the Celtics had to survive Jordan’s eye-goggling 63-point barrage, which remains a record for an NBA playoff game. His between-the-legs dribble and stepback jumper in Bird’s face is still one of the greatest highlights in NBA history. “That wasn’t Michael Jordan out there; that was God disguised as Michael Jordan,” Bird said.

One day after a leap from the free-throw line to beat the Human Highlight Film, Dominique Wilkins, in one of the greatest NBA Dunk Contests ever, Jordan dumped 40 points on Magic Johnson and the Western Conference All-Stars in front of his own home crowd. At the time, it was 2 points short of Wilt Chamberlain’s record for All-Star Game scoring. 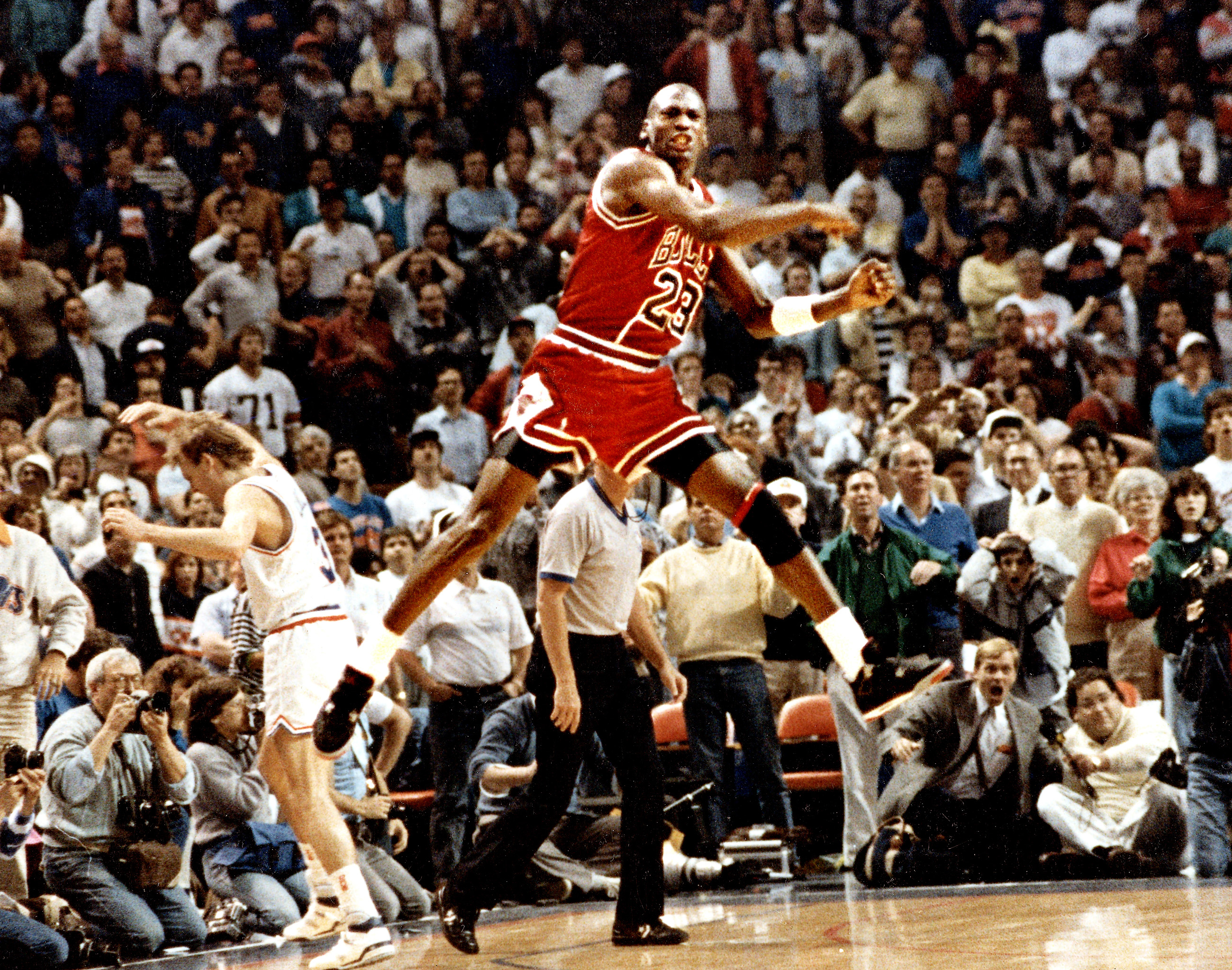 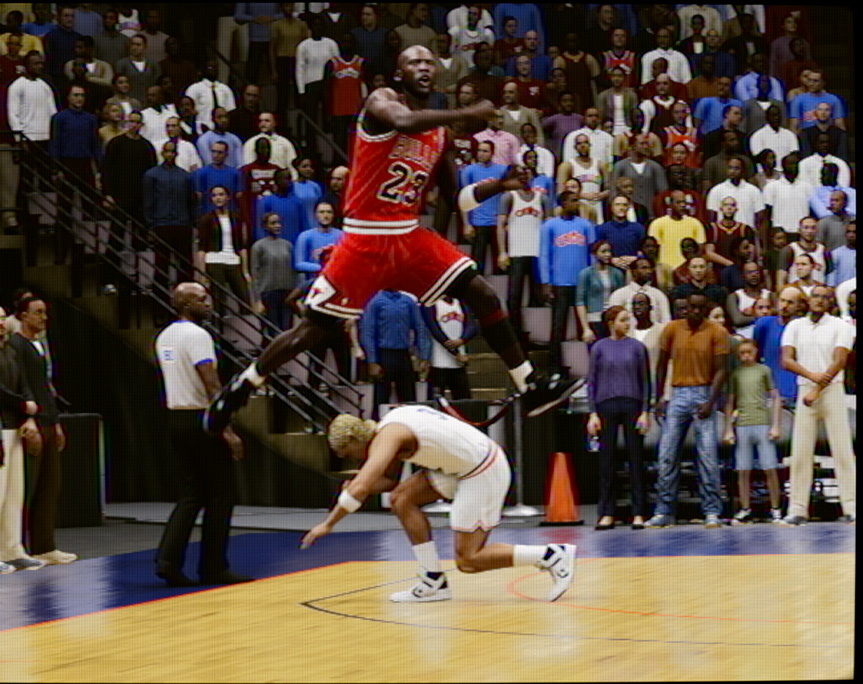 You’re probably already visualizing it. Three seconds to go. Bulls trailing 100-99. Brad Sellers inbounding the ball from midcourt. Larry Nance and Craig Ehlo double-teaming Jordan. Jordan shoves Nance out of the play and takes Sellers’ pass, with Ehlo scrambling after him in a panic. Jordan jumps laterally at the foul line, waits for Ehlo to drift past, hangs in the air seemingly forever, and takes The Shot on the way down. Splash. Time expires. Ehlo collapses in grief, and Jordan wings four punches in the air, nearly decking Sellers in their celebration of the Bulls’ first-round playoff triumph.

Shootout at the ATL Corral

This challenge is a holdover from NBA 2K11, and is meant to showcase the scoring talent of, and rivalry between, Wilkins and Jordan at the height of their careers. It doesn’t re-create any single game that actually took place. Jordan and Wilkins’ highest-scoring game, combined, came on Jan. 19, 1990, when MJ scored 36 points and ’Nique got 26 in a 92-84 Bulls victory.

Jordan scored 54 points in an overtime victory against the Cavaliers to open the 1990 season in Chicago. They met in Cleveland four months later for another breathtaking track meet. Chicago prevailed in overtime again, 117-113, as Jordan played 50 minutes and scored 69 points on 23-of-37 shooting. His Airness himself considers this his finest performance. It also inspired one of the all-time greatest postgame quotes in NBA history, when rookie teammate Stacey King (today a Bulls broadcaster) told reporters, “I’ll always remember this as the night Michael Jordan and I combined to score 70 points.”

Chuck Daly’s “Bad Boys” Detroit Pistons made no apologies for their brutal game plan, which teed up Jordan for hard contact any time he drove to the basket. They were called “The Jordan Rules,” which was also the title of Sam Smith’s 1991 book about the Bulls-Pistons rivalry. “Any time he went by you, you had to nail him,” Daly told Sports Illustrated in 2012. “If he was coming off a screen, nail him.” The game they played was psychological as much as it was physical. Jordan and the Bulls prevailed in the 1991 Eastern Conference Finals, but not before Detroit steamrolled them on the way to NBA titles in 1989 and 1990.

Michael Jordan, Magic Johnson, the Bulls, and the Lakers inaugurated the NBA’s decade of appointment television with a five-game NBA Finals culminating in Jordan’s first championship. The Lakers stole the opening game at Chicago Stadium 93-91, but from there, it was all Bulls. The series highlight came in Game 2 with Jordan’s mind-boggling switched-hands layup, his 13th consecutive field goal of the evening, on the way to 33 points, leading all scorers. Jordan was the runaway choice for NBA Finals MVP, his first of six; no other player has won more than four.

Even 35 points was a mundane total for Michael Jordan at the height of his career — but not when it was 35 points scored in the first half, of the first game, of the Bulls’ second straight NBA championship. After burying his sixth 3-point basket of the half, Jordan turned to NBC play-by-play announcer Marv Albert and shrugged, as if to say that he didn’t know how he did it, either.

Jordan’s father, James Jordan, was murdered July 23, 1993, in Lumberton, North Carolina, one month after Jordan and the Bulls celebrated their third consecutive NBA title. In his grief, Jordan retired from the NBA, saying he no longer had the desire to play basketball, and wanted to pursue his boyhood dream of playing professional baseball. After one year riding buses in the minor leagues, Jordan returned to a listless Bulls team with a two-word announcement, “I’m back.” After a four-game tuneup, he went to New York and The World’s Most Famous Arena, and lit up the Knicks for 55 points.

This actually wasn’t one of Jordan’s better games: 22 points on 5-of-19 shooting, five turnovers, seven assists. Further, the 72-win Bulls had sprinted out to a 3-0 series lead over Gary Payton and the SuperSonics, before losing their focus and games 4 and 5. But it was still Father’s Day, and on that day the Bulls won their fourth world championship — and first since James Jordan’s death three years earlier.

With the Bulls’ series against Karl Malone and the Utah Jazz tied at two games apiece, Jordan caught some kind of stomach virus at the team hotel two nights before Game 5. The Jazz were a perfect 10-0 on their home court in the playoffs to that point. Though athletic trainers told Jordan there was no way he could play, he got out of bed less than an hour before tipoff and started the game. Jordan mustered a 38-point effort and made the game-winning 3-pointer; Chicago won its fifth NBA title two days later. “No matter how sick I was, how tired I was,” he told fans after the championship parade, “I felt the obligation, to my team and the city of Chicago, to go out, and give that extra effort.”

New to the 2023 Jordan Challenge is this meeting, between Kobe Bryant in his second year and Jordan in his last season with the Bulls. In this early-season matchup, Bryant came off the bench to score 33 points on 12-of-20 shooting. But Jordan scored 36, and the Bulls cruised to a 104-83 victory over a Lakers side absent injured big man Shaquille O’Neal.

It should have ended here. Jordan’s last shot for the Chicago Bulls was, again, the game-winner, 87-86 over Bryon Russell and the Jazz, coming after Jordan’s steal from Karl Malone with 18 seconds left. Jordan retired the following January — and returned again, in 2001, for two forgettable seasons with the Washington Wizards. But NBA 2K23 properly closes the door with MJ’s last great moment, and his sixth world title.